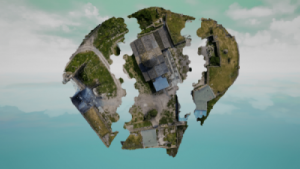 Broken up into 98 individual pieces, players assemble a gorgeous 3D scan of the Tatev Monastery recorded on-location in Armenia. Scattered throughout the environment are a handful of reference images portraying the monastery from various angles. Using their Touch controllers to “force pull” pieces into their hands, players can mix and match various parts of the environment until they correctly snap into place; by squeezing the grips, you can also zoom into the 3D scene for a better perspective. There’s even support for seated play, an especially helpful feature for those terrible at puzzles, yours truly included.

In addition to 3D visuals, Puzzle Places also feature ambisonic spatial audio with unlockable audio hotspots. Put simply, the audio will change depending on what portion of the 3D scene you’re closest to.

As developer Realities.io states in the apps description, Puzzle Places is still in its prototype phase, therefore fans can expect new features and additional puzzles as the team continues to refine the experience. If you happen to have any notes or suggestions, feel free to leave the team a message over at discord.gg/G5R5Q9E.

Puzzle Places is available for download free on Oculus Quest via SideQuest.